Showing posts from September, 2010
Show all

Winter’s Bone (2010), R, 100 minutes – Winter’s Bone is a dank and cold drama/thriller that I never would have checked out had my friend Chris not mentioned it one conversation over beers. So when he was back in town almost a month later we decided to give it a look down at the local art house theater, the one place in town that consistently screens such films. And I’m glad we did. Winter’s Bone is based in the Ozark Mountain region and revolves around Ree (Jennifer Lawrence), a 17 year old girl who gets by day by day supporting her family (mother, two younger siblings) in the absence of her drug peddling father who has recently been arrested. Things get more complex when the local Sherriff (Garret Dillahunt) stops by to inform Ree that her father put up the family house and land in order to post bail. If he doesn’t show up at his hearing, they lose it all. Ree vows to make sure that her father shows up and begins hunting him down by contacting some not so nice family members a
2 comments
Read more

The Town (2010), R, 120 minutes - The Town is Ben Affleck's sophomore outing as a director and with it he proves that the ability he showed behind the camera on Gone Baby Gone was not a fluke. Like Gone Baby Gone, The Town is a crime drama/thriller based in Affleck's hometown of Boston. This time around, Affleck focuses primarily on the criminals, their lives and their motives. Affleck joins Jeremy Renner (The Hurt Locker) as one of two primary characters who are both best friends and partners in crime. Doug MacRay (Affleck) and James Coughlin (Renner) are residents of Charlestown, MA, which the opening of the film claims has the highest bank/armored car high jacking rate in the country. After one job, James takes a hostage (the bank's assistant manager - Claire Kessey, played by Rebecca Hall). He let's her go unhurt, but decides after wards that she may need to be 'taken care of' as it turns out she is a local resident. He's afraid that she may be
Post a Comment
Read more 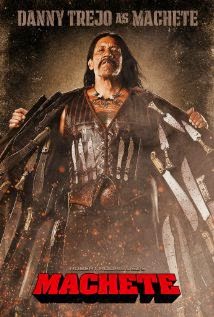 Machete (2010), R, 105 minutes – Remember that big B rate flick Quentin Tarantino and Robert Rodriguez dropped on us a couple of years ago called Grindhouse? Do you also remember how the best part of Grindhouse was the fake trailers? Well 3 years later, Rodriguez brings his fake trailer to life with a full length feature. Danny Trejo retains the role of Machete, a former federale and overall badass Mexican who was left for dead by a drug lord named Torrez (Steven Seagal) after interfering in his affairs. After the film opens with that bit of back story, we find Machete in a small Texas town trying to get by as a day worker. He’s hired by Michael Benz (LOST’s Jeff Fahey), but not for the job he thinks. Benz offers him $150,000 to assassinate the corrupt local Senator McLaughlin (Robert DeNiro) who is running for re-election with an extremely tough immigration platform. The Senator also goes out on late night immigration hunts with an equally corrupt police squad led by Lt. Stillma
Post a Comment
Read more

Review - The Girl Who Played With Fire

The Girl Who Played With Fire (2009), R, 129 minutes - It's been a while since my last post due to the chaos of trying to get moved into the house. It has been a slow process, but I'm making headway. So after too much of a delay, here's my latest review: I had been patiently waiting for The Girl Who Played With Fire to come to the Grandin Theatre back in Roanoke, but was pleasantly surprised this weekend in SC at my parent's house when I learned that it was playing at a theater about 30 minutes down the road. Not knowing when it will show up back home, I was able to sneak away this afternoon to check it out! The Girl Who Played With Fire is the second installment in the Swedish film trilogy based on the Millennium trilogy of books (the first of which was The Girl With The Dragon Tattoo). If you have not either seen the first film or read the books then don't bother taking two hours out of your day checking this out because you will be completely lost. I
1 comment
Read more
More posts