Showing posts from October, 2017
Show all

Professor Marston and the Wonder Women (2017), R, 1h 48min - I hadn't even been aware of this film's existence until a month or so ago when I happened upon the first trailer on YouTube.  In a year that has seen Wonder Woman dominate the box office and single-handedly breath new optimism into the future of the DCEU (DC Extended Universe), we now get this film about Wonder Woman creator William Moulton Marston's life and its influence on the development of his most well known creation. Marston (Luke Evans) and his wife Elizabeth Holloway Marston (Rebecca Hall) - highly regarded in her own right - were both psychologists, specifically studying human interactions.  William was a firm proponent of DISC theory, believing that a person's reaction in any given situation was a combination of the following components: Dominance, Inducement, Submission, and Compliance.  He was also a supporter of the feminist movement and took an actively participated in his research.  While
Post a Comment
Read more

The Snowman (2017), R, 1h 59min - After I finished reading IT a few weeks back, I set my sights on this novel by Jo Nesbø, with hopes of finishing it before the movie hit theaters.  I ended up finishing the source material this past Sunday, which kept me from catching it on opening weekend.  But honestly I ended up being even more intrigued by the film after seeing that it was receiving less than stellar reviews along with its sub-par performance at the box office.  Thanks to an odd day off from work, I was able to see Tomas Alfredson's big screen adaptation yesterday afternoon, and while I feel as though the casting of characters was pretty good, the film itself is a bit disjointed and anti-climactic. The Snowman is based on the seventh of Nesbø's series of novels focusing on the exploits of Dectective Harry Hole (Michael Fassbender) of the Oslo (Norway) Police Department.  Hole and Katrine Bratt (Rebecca Ferguson), a recent transfer into the department, begin working a s
Post a Comment
Read more

Blade Runner 2049 (2017), R, 2h 44min - Prior to this past week, it had been quite a while since I had sat down and watched the original Blade Runner (1982), which was really a disservice to myself, especially when compiling my  Most Anticipated Films of 2017 post earlier this year.  On that list, Blade Runner 2049 was only an honorable mention.  Had I seen the original more recently, 2049 would likely have easily cracked the Top 10.  So prior to seeing Blade Runner 2049 yesterday afternoon, I made sure that I did my due diligence and gave the original a re-watch.  And I'm glad that I did.  Not only was I reminded of how awesome the original was, it prepared me for what was to come with my theatrical experience for 2049. Blade Runner 2049 takes place in the year 2049 (surprise!), thirty years after the events of the original film (based upon the world created by Philip K. Dick in his novel Do Androids Dream of Electric Sheep? ).  The Tyrell Corporation, manufacturer of the wo
Post a Comment
Read more 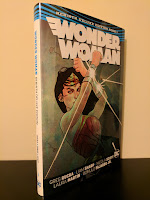 Wonder Woman Rebirth Deluxe Edition Book 1 : Collecting Wonder Woman: Rebirth (2016) #1, Wonder Woman (2016) #1-14 When DC originally announced their Rebirth initiative, the title that I was looking forward to the most was Wonder Woman.  Greg Rucka was making a return to the character (he had already written one one highly acclaimed Wonder Woman run in the early 2000's), and artistic duties were going to be split between Liam Sharp (whose work I had not previously been familiar with) and Nicola Scott (who like Rucka, would be dancing with Diana a second time).  Many of the Rebirth titles were implementing multiple artist teams in order to keep up with the the bi-weekly shipping schedule, but Wonder Woman differed in that Rucka was going to juggle two story arcs at once, alternating issues between 'The Lies', a story set in present day (Sharp), and a 'Year One' story set in the past (Scott).  Rucka had signed on to steer the title for the first year of the Rebirt
Post a Comment
Read more

IT (2017), R, 2h 15min - A month ago, just a few short days before this film arrived in theaters, soon to destroy September and R-rated horror box office records, I had little to no interest in seeing this new adaptation of Stephen King's classic novel.  I had somehow managed to overlook the fact that IT had been directed by Andy Muschietti, whose feature length film debut had been one that my wife and I both enjoyed (2013's  Mama ).  Maybe this oversight was due in part to a slight name change (Muschietti had previously been credited as Andrés), or maybe I'm just a moron.  More likely, it was a combination of the two.  In any event, I found myself suddenly very interested in the film as did my wife. We decided that we would wait to rent IT so that we could avoid obnoxious crowds that often frequent horror releases.  Since we had decided to wait, I thought that I'd take advantage of that delay and familiarize myself with King's original novel.  What I didn't
Post a Comment
Read more
More posts