Showing posts from August, 2010
Show all

Review: Scott Pilgrim vs. The World

Scott Pilgrim vs. the World (2010), PG-13, 112 minutes - Scott Pilgrim vs. the World is Edgar Wright's (Shaun of the Dead, Hot Fuzz) film adaptation of Bryan Lee O'Malley's series of manga sized graphic novels (Oni Press). A couple of friends have been ranting and raving about the Scott Pilgrim books for a couple years but I had never read them myself until about two weeks ago. I highly recommend them (buy them here ). Should you be any interested, I strongly encourage you to read them all (6 total) before seeing the movie as it covers the entire story. I know, I know, it sounds like a lot, but trust me - these bad boys read very quickly . I was able to knock each one out in about an hour and I'm not a very speedy reader. Now that I've gotten that out of the way - Scott Pilgrim vs. the World is an absolutely fantastic adaptation of the source material. The film clocks in at just under two hours and covers all of the key points throughout the graphic novels. The tr
Post a Comment
Read more 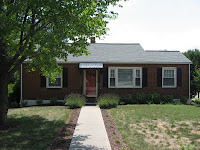 As most of you already know, I joined the ranks of home owner yesterday. Southwest Virginia has been home since my freshman year at Virginia Tech (with the exception of about 6 months after graduation) and now it's quite a bit more permanent. I've wanted to make the jump from renting to owning for a while now but it just wasn't feasible. Getting student loans paid off in January helped some, but I never could have taken this step without a great deal of help from my Aunt Carol and Uncle Bob. A measly blog post can't even begin to express my gratitude so I will simply say 'thanks' and 'I miss you'. It's been a hectic past 36 hours, but many of you have already been clamoring for pictures. Here are a handful to get the gist. It's located in the Raleigh Court region of the 'noke and was built in the 1950's. 2 real bedrooms, 1 bath, a den/study, full basement (1/2 finished, 1/2 garage). The finished half of the basement has another r
2 comments
Read more
More posts