Showing posts from June, 2011
Show all

Review from the Vault - Transformers: Revenge of the Fallen 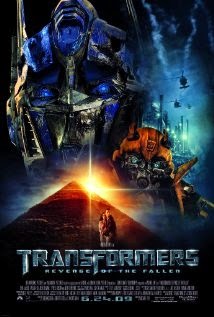 Over the past couple of weeks I have been asked on numerous occasions whether or not I plan on seeing Transformers: Dark of the Moon in theaters. Any given day my answer seems to drift between 'after Revenge of the Fallen? Are you serious!?' and 'there's a good chance I'll get talked into it.' I had not yet started this blog two years ago when Revenge of the Fallen came out, but I did post the below review on the Flixster app on facebook. I figured that since I have been getting so many questions about Dark of the Moon that I should re-post this review so those who have not heard my rant about Fallen can see why I'm so leery about Dark of the Moon despite the trailer making it look quite intriguing. The review below is a straight copy/paste. I have not edited any of the content from the original post (which wasn't my best edited work by a long shot). I do have every intention of seeing Dark of the Moon eventually. Whether or not that happe
Post a Comment
Read more

Green Lantern (2011), PG-13, 105 minutes - Over the past 6 years, Green Lantern, under the watchful eye of writer Geoff Johns has become one of my favorite comic books. So, as one could imagine, I've been looking forward to this pretty much since the day that it was announced. The first teaser trailer from late last year come off pretty cheesy and I started to worry a bit. Later trailers were cut differently and looked much more promising. Then, this week, initial reviews started coming out and Green Lantern was getting absolutely crushed. So last night when I went out with a few friends to see it, I wasn't sure what to expect. Could it possibly be that bad? I had a hard time believing that. Geoff Johns didn't pen the script, but he did Co-Produce the film (Marc Guggenheim, another comic author helped with the screenplay). And anyone who has read even a couple of issues of his run can tell that he cares deeply about the character. Surely Warner Brothers would li
Post a Comment
Read more

Super 8 (2011), PG-13, 112 minutes - Super 8 is yet another movie that made my Most Anticipated Films of 2011 list. Come to think of it, there are only 3 movies from that list yet to be released. Maybe I should have made it for the first half of the year. Oh well, that's a conversation for another time. Anyway, Super 8 is brought to us by the minds of JJ Abrams and Steven Spielberg, so it must be good right? Abrams tells his story through the eyes of Joe Lamb (Joel Courtney) and his friends, a group of teenagers making a zombie movie over their summer vacation back in 1979. While filming one late night at a local train station in an attempt to add more 'production value' to their film, the group witnesses and survives a horrendous train derailment. Ordinarily such an incident would be bad enough for a small town, but this train was carrying top secret Air Force cargo, something that escaped the crash. After the incident the Air Force takes over the crime scene,
Post a Comment
Read more

Kung Fu Panda 2 (2011), PG, 90 minutes - Three years ago, Kung Fu Panda was a pleasant surprise. It was an extremely well animated, well told, ridiculous story of a fat slob of a panda becoming part of a team of Kung Fu masters. Luckily, this follow up provides more of the same fun. Jack Black returns as Kung Fu Panda Po, and the Furious 5 are also back with their original voice actors (Angelina Jolie, Jackie Chan, Seth Rogen, Lucy Liu, and David Cross). The best addition to this sequel is the character of Lord Shen, voiced by Gary Oldman. Shen is a peacock who is the overzealous heir to the ruling family of Gongmen City. After having been banished for years, he returns not only to take his rightful place on the throne, but to expand his rule across all of China. Po and the Furious 5 battle Lord Shen and his army of wolves (led by Wolf Boss voiced by Danny McBride) in an attempt to keep China free of Shen's rule. Kung Fu Panda 2 is a good follow up and builds on the ch
Post a Comment
Read more

First Impressions - The Girl with the Dragon Tattoo (2011): First Trailer

The first trailer for David Fincher's version of The Girl With the Dragon Tattoo has been released, and while it is only a minutes and forty seconds long, I am both encouraged and discouraged by it. Anyone that has followed this blog over the past year knows how much I enjoyed the original Swedish versions of the movies based on the late author Stieg Larsson's 'Millennium' Trilogy. I won't re-hash my love for the films here, you can see my reviews for the Swedish films at these links: The Girl with the Dragon Tattoo , The Girl Who Played With Fire , The Girl Who Kicked the Hornet's Nest . I am encouraged by a couple things. Even though the trailer is a collection of many short clips, it appears as though Fincher has kept the most disturbing scenes which is really the foundation for the Lisbeth Salander character. What will be interesting to see will be how those scenes are shot and cut. They were pretty graphic in the Swedish film and I remember thi
Post a Comment
Read more

X-Men: First Class (2011), PG-13, 132 minutes - Each summer I take a day trip down to Charlotte, NC with some friends to wander around HeroesCon (a comic book convention put on by Charlotte based comic shop Heroes Aren't Hard to Find). Part of the trip has always been stopping on the way home to get dinner and to take in a movie. The film selection tends to be comic or game based depending on what is in theaters at the time. Over the six years that I've been a part of these trips, we've seen some absolute wrecks (Prince of Persia: Sands of Time), and some half way decent flicks (The Incredible Hulk). This year's obvious choice, since it was just released, was X-Men: First Class. After Fox has done their best to completely ruin the X-Men franchise since X-2 (I am referring specifically to X-Men: The Last Stand and Wolverine: Origins), none of us had very high hopes going in. Just over two hours later, we all agreed that not only was this easily the best Charlo
Post a Comment
Read more

The Hangover Part II (2011), R, 102 minutes - A few months ago when I first heard that a sequel to The Hangover was being made, I was very leery. How would they follow up the original? It was a classic adult comedy that told a fairly stand alone story. As teasers and trailers for the new film were released, I became less leery and even began looking forward to the follow up. Well, the answer to my question was answered. The answer? You follow up The Hangover by making the sequel in almost exactly the same way. The story beats are virtually identical. The only difference is that Part II sports some even more adult, more crude humor than the first one. Don't get me wrong, The Hangover Part II is a fun hour and forty minutes, it just doesn't bring anything new to the table. Bradley Cooper, Ed Helms, Zach Galifianakis are up to more of their old shenanigans and those looking for more Mr. Chow (Ken Jeong) will be pleased. There is a humorous look into how Alan see
Post a Comment
Read more
More posts