The final issue of the unique wedding/heist mashup Going to the Chapel hits comic book store shelves Christmas week (12/26), and for those who have been following this series, its a perfect holiday gift from the creative team of David Pepose, Gavin Guidry, Liz Kramer, and Ariana Maher.

This fourth issue delivers a great conclusion to this unconventional love story, implementing humor, action, slight of hand, yet another twist (there's been a nice little one each issue), and a whole lot of heart.  Does Emily choose her fiancé Jesse or her old flame Tom?  Does Grandma Harriet continue to kick ass?  Whatever happened to the Heart of Dresden sapphires?  And most importantly, how in the hell does David Pepose wrap all of this up in one last issue?  You'll have to pick it up to find out for yourself, but this is definitely a wedding…
Post a Comment
Read more 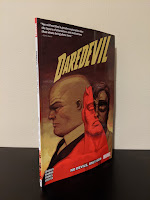 As a result of the accidental death at his hands, Matt is experiencing a crisis of faith in regards to his abilities and actions as Daredevil.  He had previously believed that he had a duty to use his abilities to help protect others, but now questions whether or not he was actually doing good or inadvertently increasing the level of danger of the incidents he intervened in.  Matt decides to give up being Daredevil, but that doesn't stop a number of other concerned citizens of Hell's Kitchen from using him as inspiration putting themselves in danger in an effort to fill his role as protect…
Post a Comment
Read more

Life's been a little hectic lately, and as a result, my 'preview' for the third issue of Going to the Chapel is a bit of a misnomer as it is getting posted a few days after everyone could get their hands on the new installment (on November 6).

The third chapter in this romance/action/comedy/heist mashup provides additional context as to Emily's frame of mind during the whole mess before proceeding to take multiple twists and turns. I almost feel like I can't say much more without spoiling anything (which I've never been a fan of doing).  I know that's a bit contradictory for a 'preview' but if I tell you what happens, then why would you go out and read it?

Honestly though, if the following preview image doesn't make you want to read this book, I don't know what will:

The second chapter of Going to the Chapel hits LCS shelves everywhere this Wednesday (10/23) and it's an installment that you'll definitely want to pick up if you read last month's premiere issue as it doles out important back story and advances the current plot in ways that present some interesting new wrinkles to this not-so-typical heist tale from David Pepose and Gavin Guidry.

For those who didn't read the first issue, allow me to bring you up to speed: Socialite Emily Anderson's wedding to local architect Jesse Moore is interrupted when the notorious Bad Elvis Gang shows up looking to steal the $250 million Dresden sapphire necklace that Emily is wearing (on loan to her father from Paris).  As it turns out, Emily has a bit of a past with Tom, leader of the Bad Elvis Gang, which turns this heist into a bit more tha…
Post a Comment
Read more

This is the story of four friends...
...and what happened when one of them was murdered.
Like most stories, it gets worse before it gets better.
Much worse.
I wish I could say everything worked out in the end...
But life's not a fucking fairytale.

This is how Frank Gogol opens the final chapter of Dead End Kids (out this coming Wednesday, 9/25).  Not only is he up front about what's about to follow, he's downright blatant about it: this tale that is part Goonies, part Stand by Me but set at the turn of the century, will not end well.  The thing is, that even despite his explicit warning, you're still not ready for the emotional punch to the gut that he and his co-conspirator Nenad Cviticanin are about to deliver over the closing pages of the series.

It always drives me crazy when I recognize a creator's name, but can't for the life of me place it.  When that happens to me, it generally means that something they've worked on has made its way onto my ever-growing "to read" list, but that I haven't actually gotten to it yet.  It turns from maddening to embarrassing when you receive a message from a creator asking if you'd like to give their new series an advance look and you realize that one of their previous titles is on said list, but after two years, still remains unread.  Such was my embarrassment when David Pepose reached out about his upcoming mini-series, Going to the Chapel from publisher Action Lab: Danger Zone.

The four issue mini-series opens with Emily Anderson preparing to walk down the aisle to wed architect Jesse Moore, with …
Post a Comment
Read more

I'm trying to figure out if I have the time to try to keep up with quick single issue reviews or if anyone even finds them beneficial at all.  Fortunately for me, Dead End Kids (Source Point Press) is just three issues - and great ones at that - so it is providing me with a nice little trial run.

The first issue of Dead End Kids came out just two weeks ago and was very well received, having sold out at the distributor level days before it's actual release.  For those who missed it, the good news is that there's been enough interest in the issue that it is going back to print.  If you're one of those who couldn't get your hands on a copy the first time around be sure to let your LCS know so you can catch the second printing (order info below).

I'll try to jump right in and keep it short and sweet as to not spoil anything.  With a single issue review you certainl…
Post a Comment
Read more 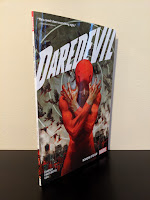 With his run on Daredevil, Chip Zdarsky has said that he wanted to lean into the dark and gritty tendencies of the character as opposed to a more lighthearted tone, which he has come to be known for from his work on titles such as Sex Criminals (which he drew), Howard the Duck, and Peter Parker: The Spectacular Spider-Man.  He has certainly achieved that goal in Know Fear, his first arc on everyone's favorite Hell's Kitchen resident.

This arc kicks off the latest volume of Daredevil (the sixth overall), and is a great place to jump on the book if you haven't paid attention to the character in recent years.  It picks up after the events of both Charles Soule's run that preceded it and the Man Without Fear: The Death of Daredevil mini-series by Jed MacKay (obviously Daredevil is not actually dead, but the mini does act as a nice bridge between the Soule and Zdarsky runs).  Zdarsky does a …
Post a Comment
Read more

Some followers of this blog may remember my review for Frank Gogol's first published work last summer, the well received anthology collection GRIEF. Over the past year, he's been building on the success of GRIEF, crushing the con circuit, and developing new idea after new idea.  As a result, beginning in July, Source Point Press will be releasing his first mini-series: Dead End Kids  (the official announcement of which was made in March at the Chicago Comic & Entertainment Expo - C2E2).

I don't generally review single issues - it's much tougher to discuss a single chapter of a story without spoiling it - but when Frank reached out and asked if I'd like to read an advance copy of Dead End Kids #1 and I thought it would be fun to do something a little different (full disclosure: I 'met' Frank Gogol through a comics-centric Facebook group a little over a…
Post a Comment
Read more

Shazam! (2019), PG-13, 2 h 12min - Shazam! has been out for a couple of weeks now (not including the early preview weekend), and after being delayed by much needed yard work, I was finally able to check it out last weekend.  I haven't had much time to work on my review, but I did want to get something written up on it so I apologize in advance for this being short and sweet.

I have very little prior experience and knowledge of the character.  As a matter of fact, the only Shazam! material I had read before seeing the movie was the story arc that Geoff Johns and Gary Frank did as backup features in Justice League during DC's New 52 era, and the first couple of issues of Johns' current run on the title with Dale Eaglesham.  Which actually turned out to be fortunate, as this film takes a lot of inspiration from Johns' take on Billy Batson and family.