Showing posts from August, 2017
Show all

The Defenders, TV-MA, 8 Episodes - About four years ago, Marvel announced their plans to produce four series based upon street level heroes that would culminate in a crossover mini-series teaming the four heroes.  All of this would take place in the greater MCU, and all five would be distributed by Netflix.  This past Friday gave us the completion of that first phase of what has become the highly successful Marvel/Netflix partnership with the release of The Defenders. The Defenders begins with each of the solo heroes - Daredevil (Charlie Cox), Jessica Jones (Krysten Ritter), Luke Cage (Mike Colter), and Iron Fist (Finn Jones) - dealing with issues in their own parts of New York City.  Little do they know, that they are poking their noses into different criminal activities of the same organization: The Hand (previously seen in Daredevil and Iron Fist).  Before they know it their investigations overlap and they unintentionally get in each other's way.  After some brief conflict,
Post a Comment
Read more 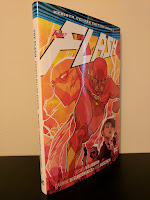 The Flash Rebirth Deluxe Edition Book 1 : Collecting Flash: Rebirth (2016) #1, The Flash (2016) #1-13 I have been keeping up with a few of DC's Rebirth titles digitally over the past year (all of which I have enjoyed), but this Deluxe Edition of The Flash marks the first from DC's new line that I have picked up to add to my collection.  That is partly due to the fact that it was the first title that I wanted to grab to be released, and partly because I have really enjoyed this latest volume of Barry Allen's adventures so far. Prior to reading the The Flash Rebirth (2016) - not to be confused with the Geoff Johns mini-series from 2009 - I had not been familiar with Joshua Williamson's work, although I did recognize the name from hearing chatter about his Image title Nailbiter (which I have yet to read).  On the other had, I was familiar with prior work of primary artist Carmine Di Giandomenico as he had co-written and illustrated the Daredevil: Battlin' Jack Mu
Post a Comment
Read more

Dunkirk (2017), PG-13, 1h 46min - Christopher Nolan is one of my favorite directors and I particularly enjoy war films, especially when they are based upon actual events.  So when trailers for this film first hit the internet I knew it was one that I was definitely going to see (it was even number five on my Most Anticipated Films of 2017 list earlier this year).  Dunkirk provides a look at World War II from a different point of view (i.e. not American), through Nolan's unique, non-linear presentation. For those like myself, who are not well versed in the specifics of such historical events, here is a little context: the events shown in this film took place in 1940 after France had been invaded by Nazi Germany.  The Germans had pushed Allied forces to the point where retreating to the beaches of Dunkirk was their only option.  In doing so, the Allied troops became trapped between their shrinking perimeter and the ocean, leaving themselves open to attack from the air while awa
2 comments
Read more
More posts