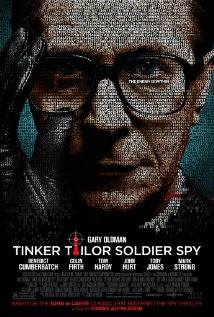 Tinker, Tailor, Soldier, Spy (2011), R, 127 minutes - I've been looking forward to this film for a couple months now (ever since first seeing the trailer online), looking forward to it for a couple of reasons: 1) Gary Oldman and Colin Firth are on my 'must see' list, and 2) Tom Hardy is quickly racking up a resume worthy of being on said 'must see' list.  It also doesn't hurt when you throw in John Hurt and Mark Strong for good measure.

Tinker, Tailor, Soldier, Spy is, as one might expect, a spy flick.  I have not read the source material (John Le Carre's novel) so I cannot compare how the film lives up to the story, but in my opinion it is a very well made 'thriller' at that.  I use quotes when I say thriller because it is actually a fairly slow moving film.  There really aren't any action sequences to speak of (unless you count one scene in which Tom Hardy's character gets punched).  It is a much more cerebral story than your typical thriller.  It is slowly paced, but director Thomas Alfredson (Let the Right One In) uses the pace to his advantage as he is able to cast doubt and suspicion on each of the story's suspects because of it.  Of course, he's helped with this by an outstanding cast led by Oldman and Hardy, but also including Firth, Hurt, Strong, Toby Jones, and Ciaran Hinds.

Set in the offices of 1970's British Intelligence during the Cold War, Tinker, Tailor, Soldier, Spy sees intelligence director Control (Hurt) step down after an operation in Budapest goes horribly wrong.  Agent George Smiley (Oldman) is forced into retirement by Control's departure, but is reinstated in order investigate the possibility of a Russian mole in the British Intelligence's upper echelon.  It is believed that Smiley is in a unique position to head the investigation as it is believed that the mole is one of four agents that he formerly worked with (Firth, Jones, Hinds, and David Dencik).  Smiley's investigation gets a boost when a lower ranking British agent (Hardy), who had been thought to have been a Russian double agent himself (accused by the real Russian mole to cast doubt on his intel), makes contact claiming to have information about the Russian mole.  His information casts more suspicion on the group of high ranking agents, and eventually leads to the apprehension of the true mole.

I felt that Tinker, Tailor, Soldier, Spy was a bit different than your standard spy film in that it doesn't really focus on the suspects themselves.  Thomas Alfredson does a great job of shifting doubt and suspicion between characters by following Smiley's investigation and interviews of tertiary characters and the intel that they provide.

If you enjoy spy thrillers, Tinker, Tailor, Soldier, Spy is well worth looking into.  It is definitely a slow burn, but that is actually one of its strengths.  And no, it may not be filled with action shots, but the strong cast more than makes up for that.  Just be sure to get comfortable and pay close attention so that you can properly enjoy this well made espionage film.