Review - The Hobbit: An Unexpected Journey

The Hobbit: An Unexpected Journey (2012), PG-13, 169 minutes - After The Lord of The Rings: The Return of the King came out in 2003, the question soon became 'when would The Hobbit be adapted?'. Legal/contractual issues then made the world wonder if The Hobbit would ever be made at all.  Once that situation got sorted out, Jackson was going to produce while Guillermo del Toro was set to direct.  It took so long to get things off the ground, del Toro moved on to other projects and The Hobbit was left up in the air again.  Finally Jackson decided to take another trip through Middle Earth, the universe that he so perfectly brought to life with the Lord of the Rings trilogy.  It only took nine years, but the first part of Jackson's vision of J.R.R. Tokien's The Hobbit is finally here.

An Unexpected Journey follows a young Bilbo Baggins (Martin Freeman), an unassuming hobbit that is very much a homebody.  Gandalf (Ian McKellen) pays him a visit and unbeknownst to Bilbo, chooses him to be the fourteenth member of a party of dwarves that are setting out to reclaim their motherland from the dragon Smaug.  Dwarves start arriving at Bilbo's hobbit hole and begin to eat him out of house and home.  Bilbo is completely beside himself before Gandalf returns and explains what he has planned.  The group is finally joined by their leader, Thorin Oakenshield (Richard Armitage), the rightful air to the dwarven kingdom and after much feasting, planning, and arguing they set off on their journey.  Bilbo really wants nothing to do with an adventure, but Gandalf reminds him of his ancestors who very much broke away from standard hobbit lifestyles.  As the dwarves start down the road, Bilbo comes running after them pointing out that he has in fact signed the contract to join their company.  They are at a loss for words, but Gandalf assures them that he selected Bilbo for a reason.  This is actually a pretty lengthy lead in to the film, but it sets up the story and the characters nicely.  And considering that The Hobbit will now be made into three feature length films instead of two as originally planned, spending the time to get to know characters really isn't a problem.

Visually, An Unexpected Journey is stunning.  It is being screened in three different formats in theaters.  The standard 2D, 24 frame per second frame rate, 3D (also at 24 frames per second), and a super high quality 3D with a frame rate of 48 frames per second.  Due to show times and personal preference, I skipped all of the 3D hoopla and saw the standard 2D version and it was still beautiful.  The Hobbit fits right in with Jackson's other films from Middle Earth.  My only nitpick is that the White Orc, and his warg's sometimes looked CGI'd compared to the rest of the film.  Obviously a good bit of the visuals have gotten some CG help, but it is a little odd for it to stand out like that.

The cast was also quite good.  Martin Freeman's performance as a younger Bilbo was spot on.  The film follows Bilbo's maturation from that quiet homebody into someone that despite appearances, can help the group in his own way after all.  Freeman's portrayal of that transformation really drives the point home.  I thought that Richard Armitage as Thorin and Ian McKellan returning as Gandalf were also quite strong.  Some familiar faces from The Lord of the Rings trilogy pop up including Hugo Weaving (Elrond), Cate Blanchett (Galadriel), and Christopher Lee (Saruman).  The film even begins with a prologue that includes Ian Holm (Bilbo in his later years) and Elijah Wood (Frodo) which was also a nice nod to the previous films.  Last to be mentioned in my review, but certainly not least is Andy Serkis.  He once again brings Gollum to life in such an uncanny way it is unbelievable.  He continues to bring more and more to the art of acting for motion capture.  The finished product that brings Gollum to life is what makes the White Orc and his warg's look out of place comparatively.

I think it has been almost twelve years since I last read The Hobbit so the source material wasn't as fresh in my head as I usually would have liked.  That being said, I think that after seeing it, I am glad that I hadn't re-read it recently.  I wasn't getting distracted throughout the film thinking 'oh this is different'.  I was able to enjoy the movie as it was meant to be.  Some scenes were very faithful from what I do remember (the Bilbo/Gollum battle of riddles).  There were some parts that I could not remember having read, but nothing stood out blatantly as not fitting into the story.  Like its predecessors, it is quite lengthy (just over two hours and forty minutes), but it never drags.  Once the company gets started on their journey the pace moves along quite nicely.

If you enjoyed The Lord of the Rings trilogy or are a Tolkien fan on any level, The Hobbit: An Unexpected Journey is a must see.  Even if you aren't, it is one of the best films to be released this year.  It is definitely a hectic time with the holidays, but if you are able to free up three hours, this is an excellent way to spend it.  The biggest problem with The Hobbit: An Unexpected Journey is that, like the previous glimpses into Middle Earth, there's a year to be waited in between installments.  But if that's the worst thing, I guess I really can't complain!

- Peter Jackson has said that they are stretching The Hobbit into a trilogy because they will elaborate on certain things that only took a couple paragraphs or pages to go over in the book.  From what I have read, some of these things will be pulled from the appendices of The Hobbit, some from The Silmarillion, and some will be completely made up.  I enjoyed not having the source material fresh in my head for this first film, but I do think that I will be sure to re-read my copy of The Hobbit before the next film (The Desolation of Smaug) comes out next winter.

- I don't believe that the White Orc was part of the book (at least not to the extent that he was in the film), but that plot thread felt like it belonged, even if he didn't quite look up to snuff compared to the other effects in the film.

- I really can't say enough about the performances of Martin Freeman and Andy Serkis, especially in their scene of riddles.  Whenever a story like this gets adapted for the big screen there are always certain things that you really hope they get right.  That scene was the perfect example.  Not only is it important to The Hobbit, but it sets up The Lord of the Rings as well and they nailed it.

- A friend at work passed along the organizational chart below and I found it entertaining and thought I'd share it too: 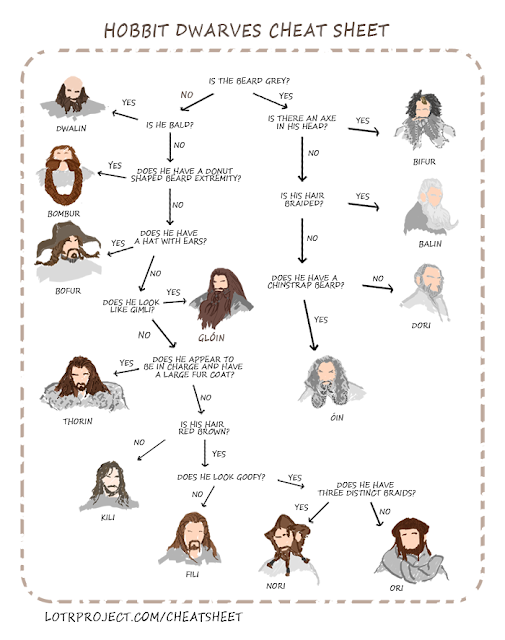