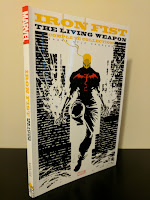 In the weeks following the release of the latest Marvel/Netflix collaboration - Iron Fist - we have also seen the release of two new Iron Fist-centric trade paperback editions.  The first was Iron Fist: The Book of Changes, collecting material from the late '80's and early '90's.  Then this past week saw the release of Iron Fist: The Living Weapon Complete Collection, which collects the entire twelve issue series by Kaare Kyle Andrews that was originally released from 2014-2015.  The Living Weapon is a series that I had begun reading digitally when it first came out, but for one reason or another lost track of.  For months I have been meaning to go back and read it in its entirety since it had ended and just haven't had the chance.  The series had previously been collected in two, six issue long trades, which I had avoided since I prefer the hardcover format.  I had been holding out in hopes of a hardcover edition, but that now seems highly unlikely due to the release of this Complete Collection, so I broke down and picked it up. 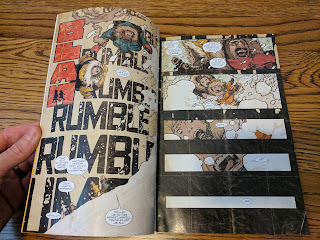 With The Living Weapon, Andrews adds a chapter to Iron Fist's history that takes place sometime after the highly regarded Immortal Iron Fist (2007) run of Ed Brubaker/Matt Fraction/Duane Swierczysnki (a run that Andrews actually contributed some covers to), and before the recently ended Power Man and Iron Fist (2016) series written by David Walker.  He approaches Danny Rand/Iron Fist's origin story from a slightly different point of view, and in doing so tells an interesting and well illustrated story that looks at Danny's life and motivations.  He splices it nicely with previous continuity while relying on what I consider to be very minimal ret-conning.  I really liked that certain parts of the classic origin story were fleshed out a bit.  For example, it always bugged me that a young child (Danny) and his mother were dragged along on his father's Himalayan expedition to begin with.  When it is all said and done, The Living Weapon also leaves Danny and some supporting characters in an interesting place, which I can only hope will be explored more in the new solo Iron Fist series that launched earlier this month (by Ed Brisson and Mike Perkins). 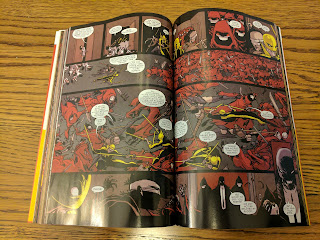 The Living Weapon is written and illustrated completely by Andrews, a major undertaking in this day and age of specialization in comics.  The only thing he didn't do was the lettering, which was provided by Joe Caramagna.  As can be expected with most trade paperback collections, there are very few extras, but this volume does reprint the 'Afterword' write ups that appeared in issues #1 and #12 as well as the variant covers from the series and a Q&A with Andrews from marvel.com, so while the extras are minimal, I found them to be interesting.  I thoroughly enjoyed this series and would highly recommend it to any Iron Fist fan, whether they come from his long comic book history or from his recent television exploits.  Having now read the series in its entirety, my desire for it to have been released as a nice oversize hardcover is strengthened even further.  It may not be likely, but if it were to happen some day down the road, I would happily trade up. 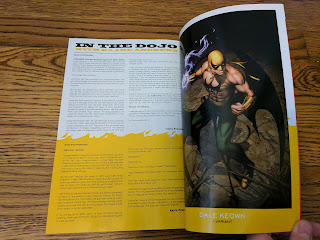