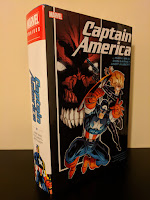 The combination of Mark Waid and Captain America is probably one that sounds familiar thanks to Marvel's recent Legacy initiative (along with artist Chris Samnee).  As you may know, Waid's current Legacy work is actually his second run on Captain America, his first being collected in this omnibus.  His initial stint with the character is a bit unique as it book-ended Marvel's Heroes Reborn era from the late 1990's (brought about by the events of Onslaught).  The creative team of Waid and artist Ron Garney had already churned out eleven issues when the Reborn experiment interrupted things, but fortunately when Marvel decided to bring the classic versions of their characters back under the Heroes Return banner, they brought Waid and Garney back along with Steve Rogers.


Waid hits the ground running in his first arc on the title (pre-Heroes Reborn), weaving a compelling story in which Captain America is believed to be dead (after an illness caused by the super soldier serum breaking down in his bloodstream), when in fact he was abducted by an uneasy alliance between Sharon Carter (Agent 13) and the Red Skull, who plans to revive Captain America and guilt Steve into helping to stop the Kubekult (a new-age Nazi cult) from using A.I.M. technology to fully charge the Cosmic Cube and remake the world as they see fit.  This seems very altruistic of Red Skull, but his actions are born of selfishness: if the Kubekult plan to charge/use the Cosmic Cube succeeds, then the Skull will not be able to do so himself.  As the story unfolds, we see how Steve's sense of right and of the greater good lead him to help stop the Kubekult, and in turn having to deal with the fall out of allying oneself with the Skull (even if it involves the villain's death).  The end of these first eleven issues sees Captain America finally clearing his name and is where the Heroes Reborn era interrupts things.  None of the Reborn material is collected here, as Waid had nothing to do with it, but we are given a page that explains the break and where that story can be found (it's a nice bit of information, even if I have no intention of taking the time to read Liefeld-Cap). There are actually a couple of other similar pages inserted throughout this collection pointing to cross-overs collected in other books.  While it would be nice to these stories collected here in their entirety, I understand why they weren't: why include non-Waid material in a Waid omnibus?  At least we are informed as to where they can be found.  I can only hope that Marvel decides to handle gaps in future collections accordingly if they exclude material.


The Waid/Garney led Heroes Return reboot follows, and begins with Cap finding himself in Japan amid the hysteria of 'Cap-mania'.  This is an interesting look at how Steve feels about the excesses of celebrity and the effects that it can have on the general public, both foreign and domestic.  The story spills into a larger tale with Kang's time-travelling machinations, leading to the return of Cap's greatest foe, and later culminating in a confrontation with Klaw.  After the twenty three post-Heroes Reborn issues, we get what I would call supplemental material from the Waid-era: a couple of annuals/one shots and the twelve issue Captain America: Sentinel of Liberty maxi-series, an anthology series that reads a bit erratically (more on that in a bit).  Throughout the entirety of Waid's entire run, he also explores the relationship between Steve and Sharon, a relationship that has very much been thrown into disarray at the beginning of his time on the title.


Waid has a great feel for Steve Rogers, and considering he recently took over the title again, it is interesting to see how he has now re-introduced Cap to the greater Marvel Universe twice.  Once from a believed death (in this collection) and now after the fall out of Secret Empire.  The art in this omnibus is quite good in my opinion, although it definitely has that stereotypical '90s feel, but hey, that's just the era in which it was produced.  Ron Garney provides artwork for the first fifteen or sixteen issues collected in this volume before Andy Kubert takes over for the majority of the rest of Waid's run on the main title.  Their styles differ enough that you can tell there was a change in the art duties, but I thoroughly enjoyed the work of both.  About the time that Garney stopped working on the main title is when he began work on the Sentinel of Liberty series (which began around the time of issue #7 of the main title).  His issues of Sentinel of Liberty along with Waid are easily the strongest of the series.  The few Sentinel of Liberty issues not written by Waid suffer in quality, leading to the aforementioned erratic read as presented here.


I've wanted to dive into Mark Waid's earlier work on Captain America for a while now and the release of this beautiful collected edition finally provided that opportunity.  There are a number of extras at the back of the book, including the original version of Waid and Kubert's Captain America (1998) #14.  This was an issue that told a story from Red Skull's point of view and was heavily edited because the original was deemed potentially offensive.  It was really cool to see the differences between the original plan and what actually saw print.  Other bonus features include Garney's original pencils for Captain America (1998) #1,  Waid's script for Sentinel of Liberty (1998) #1, and a number of reprinted introductions, articles, and creator interviews from this era in Cap's history.


Under the dust jacket, the cover itself has a gorgeous, full color, wrap-around image.  I know that this has become standard on most Marvel editions in recent years, but this one really looks great, sporting Ron Garney's artwork from the cover of Captain America (1998) #1.  If you're a fan of Cap, Waid, Garney, or Kubert this omnibus is definitely a collected edition worth adding to your shelf.