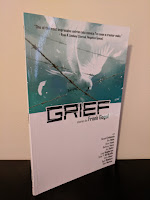 GRIEF: stories by Frank Gogol - I have a confession to make: despite my love of comics, until very recently (we're talking the last month and a half or so), I have not been very successful in supporting indie comics.  Caveat: I personally don't consider titles from Image independent comics.  Sure they are all creator owned properties, but Image is more than the big fish in the small indie pond, they're more like the the kid who has graduated from the kid's table at family gatherings.  And that is my long way of introducing this collection of stories by Frank Gogol from Comics Experience and Source Point Press.

You may be wondering how I came upon such a book since I'm not an avid proponent of indie titles.  Well, I'm actually an (internet) acquaintance of Frank's thanks to The Omnibus Collector's Comic Swap and Community group on Facebook.  This project of his began as a Kickstarter campaign last year (which I missed out on) but I have followed its progress via updates within that group.  When advance copies became available through his website shortly after C2E2 earlier this year, I made sure to snatch up a copy, and I'm glad I did.


GRIEF is an anthology of ten, unrelated short stories.  Each is just five pages long and each deals with, in one way or another, grief (or the process thereof).  Now if you're like me and primarily read comics from the larger publishers, you probably tend to think of short stories like these as filler or throw-away's that are generally found in over-sized anniversary issues or annuals.  Well, in the case of GRIEF, you'd be terribly wrong.  Frank packs more depth and emotion into each of his five page tales then you tend to see in a full length monthly comic from the industry's largest publishers.  Some of these stories one and done type stories, and others pique your interest and leave you wanting to dive further into the universe of those characters.  I really don't want to get into anything more specific than that because there's just no way that I could do so without spoiling anything, which certainly wouldn't do them any justice.


I'm not familiar with the work of any of Frank's collaborators, but I feel as though each brought something to their stories that just felt right, including the progression of the 'chapter' breaks.  The collection of artists providing work for GRIEF include: Nenad Cviticanin, Kim Holm, Ryan Foust, Bethany Varni, Jey Soliva, Luca Bulgheroni, Ester P. Gil-Munilla, Emily Elmer, Sean Rinehart, and Dani Martins.


This collection also includes a a very nice forward from Comics Experience's President, Andy Schmidt and a very heartfelt afterward from the author himself that is a personal origin story of sorts as well as providing context as to how this collection of stories came to be.


If you're interested in giving GRIEF a read - and I highly recommend that you do - you can either visit Frank's online store (while supplies of advance copies last) OR you can pre-order a copy through your local comic shop from this month's Previews Catalog - #357 - June 2018, Order Code: STL088452 (side note: this book is in full color, not black and white as the listing states):

This is Frank Gogol's first published work (congratulations sir!) and it has left me both eagerly awaiting his future work and kicking myself for not actively pursuing more independent comics.  This is a great little collection, and I feel fortunate to have 'stumbled' upon it.  The range of these stories is quite diverse and I'm pretty confident in saying that there's a little something for everyone within these pages.  If you decide to give GRIEF a shot, you will not be disappointed.