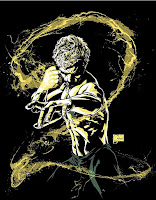 Iron Fist (2017), Season 2, TV-MA, 10 episodes - I seem to have enjoyed the first season of Iron Fist more than most, but even though I found enough cool comic book references and moments to classify the overall season one experience as positive, I certainly can't argue the fact that it was easily the weakest Marvel/Netflix contribution to the Marvel Cinematic Universe (MCU).

The good news is that Season 2 is significantly better than its predecessor.  Don't get me wrong, it isn't perfect, but new showrunner Raven Metzner has taken great strides in course-correcting the series after its critically-panned, lackluster first season.

Just like the second seasons of Jessica Jones and Luke Cage (both released earlier this year), this season of Iron Fist takes place after the events of last fall's The Defenders.  It begins with Danny Rand (Finn Jones) going out on nightly patrols in an effort to keep his promise to Matt Murdock to protect the city. Danny and Colleen Wing (Jessica Henwick) are living together in her old dojo that they have converted into an apartment.  She is volunteering at a local community center and he's working for a mom and pop moving company because "it's an honest day's work" as he tells Ward Meachum (Tom Pelphrey).

Much of the criminal activity that Danny encounters is the early stages of a gang war between Triad factions.  The Golden Tigers and the Hatchets are both positioning themselves to try and take over the city's criminal dealings in the wake of The Hand seemingly being eliminated in The Defenders.  But there's a third party getting involved in the conflict as well: Davos (Sacha Dhawan), Danny's adoptive brother from K'un Lun.  You would think that Danny would be happy to be getting help from his brother, but that isn't all that Davos is up to.  He's on a mission to reclaim the power of the Iron Fist as he feels that it is his rightful destiny and that Danny (an outsider to K'un Lun) stole it from him.  Davos enlists the help of Joy Meachum (Jessica Stroup) and MCU newcomer Mary Walker (Alice Eve) in order to manipulate Danny and obtain the power of the Iron Fist.

I really liked the exploration of personal relationships throughout this season.  Say what you will about season one, but when it was all said and done, each character had gone through some pretty messed up stuff.  This season deftly deals with that fall out, providing some great character development along the way.  I feel like Metzner has a better grasp on these characters than previous showrunner Scott Buck had.  Finn Jones has really evolved in the role of Danny.  You can see the steady improvement through the first season of Iron Fist, to The Defenders, his cameo in Luke Cage season two, and now here.  Jessica Henwick continues to be a high point for the series, and her team ups with Misty Knight (Simone Missick) make me want a Daughters of the Dragon spin-off.  I don't want to get too specific about Alice Eve's roll because I don't want to spoil it for anyone unfamiliar with her character, but let's just say that she absolutely nailed it and I'm looking forward to more.

Season two of Iron Fist continues the Marvel/Netflix tradition of utilizing smaller scale, more personal threats for the heroes to combat.  This works very well with the 'street' level characters populating this corner of the MCU.  The fight choreography is markedly improved over season one, and the fantastical elements of Danny's past are embraced, being fleshed out and built upon as opposed to being alluded to but treated almost as a joke as in season one.  While season one drew some inspirational elements from the Ed Brubaker/Matt Fraction/David Aja Immortal Iron Fist run, I feel like this season does an even better job of doing so, drawing heavily from that run not only for the story told here, but also in setting up a potential third season.

Pacing has been a bit of an issue for some of the Marvel/Netflix series, and this season of Iron Fist deals with that issue by trimming its length down to ten episodes from the thirteen in season one.  This allows for a bit tighter storytelling and keeps things from dragging out and losing momentum.  I'll be interested to see if this route is also taken with future installments of other series, such as Daredevil season three or Punisher season two, which are both on the horizon.

I really enjoyed this season of Iron Fist.  Much more than its predecessor, which I was in the minority in enjoying.  If you've invested any time in the Netflix corner of the MCU, I feel like this season is definitely worth your time, even if you haven't seen season one.  You could likely watch this season and pick up the important bits without investing the time in watching thirteen episodes of a generally considered sub-par first season.  So far there has been no word on whether or not Iron Fist will get a third season, but my hopes are that it will.  Or at least spin it into a Heroes for Hire or Daughters of the Dragon series in order to continue exploring the plot threads teased at the end of this season.

- We see the classic yellow/black Iron Fist mask in flashback sequences of Danny and Davos' time in K'un Lun.

- Alice Eve's character Mary Walker (better known as Typhoid Mary) first appeared the comics in Daredevil (1964) #254, created by Ann Nocenti and John Romita, Jr.  Her background has been changed for this series, but it works great in the context of this story and I love it.  Especially when we discover that there is a third, ultra violent alter-ego.

- Typhoid Mary has a very iconic look in the comics, with half of her face covered in white paint/makeup.  They never actually did that in this season (possibly because we have yet to actually see 'Typhoid'), but on a number of occasions the lighting used caused a similar visual effect, which was really cool.  She is also shown as having two different colored eyes, which is another nice little visual.

- The character of Sam Chung (played by James Chen) first appeared in the comics in All-New, All-Different Marvel Point One (2015) #1, created by Charles Soule and Ron Garney.  In the comics, Sam is an illegal immigrant who becomes Daredevil's protege as a hero called Blindspot.  In this series, he runs the Baird Community Center where Colleen volunteers, and helps Colleen and Danny on a couple of different occasions (albeit not on a super heroic level).  I'm interested to see if his role grows into something more in line with the comics or if the name was just used as an Easter Egg because his character as a civilian fit the show's story.

- Davos' trying to take the Iron Fist from Danny is pulled directly from the aforementioned Immortal Iron Fist (2007) run.  Other elements also taken from that run include the Crane sisters (although tweaked a bit), the Pirate Queen of Queen of Pinghai Bay, the mention of the Erskine Collection, and the reference to Orson Randall and his Iron Fist-infused handguns.

- Danny believes that Colleen may be a descendant of Wu Ao-Shi, The Pirate Queen of Pinghai Bay, and the first woman to bear the mantle of the Immortal Iron Fist.  This revelation has not been made in the comics, however it fits the characters and works really well in the story being told here.

- Colleen and Misty hear a police call referring to a 'Code 616'.  Misty explains that code is for 'a possible suspect with abilities'.  In Marvel comics, 616 is the designation for the primary universe (whereas alternate universes have different codes).

- In episode 6, there is a scene where a pile of Triad bodies are found dead and a bloody ace of spades is pulled out of the carnage.  This may be a reference to Bullseye, a primary Daredevil villain in the comics who has been announced as appearing in the upcoming Daredevil season 3.

- I didn't notice a Stan Lee cameo during this season.  Although with the less in-your-face nature of his cameos in the Netflix series, it is possible that I just missed it.  Did you see one?  If there wasn't one, I believe it is the first Marvel/Netflix collaboration that doesn't incorporate one in some way.

- The Golden Tigers are pulled from classic Iron Fist comic continuity, although they only appeared in a couple of issues.

- Misty's robotic arm gets damaged (one of Walker's machetes cuts through it) late in the season.  She even makes a crack about possibly 'blinging out' the replacement/upgrade.  Maybe we'll see a new golden bionic arm like her classic look in the comics?

- Similar to the end of Luke Cage season two, I love how the end of this season turns the status quo on its head.  As the season ends Danny is no longer the Immortal Iron Fist, as the power/title have passed to Colleen.  He and Ward are off investigating who sent the Davos the old Iron Fist corpse while Colleen is protecting the city, fist and sword infused with the power of the Iron Fist.

- At the end of this season, Netflix runs the first official teaser for Daredevil season three!  No official release date yet, but it is supposed to hit sometime before the end of the year.  I can't wait!