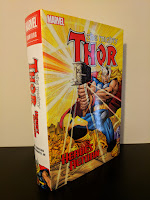 I picked this omnibus up last year when it was first released based primarily upon a good recommendation from a friend of mine, but also because Thor has become one of my favorite Marvel characters over the last few years.  I was actually in the middle of reading the Thor by Walter Simonson Omnibus when this arrived, and as epic as that was, it was a lot of Thor and I needed a bit of a break.  So now, almost a year later, I finally got around to tackling this first volume of Thor from the Heroes Return era.


Heroes Return marked Marvel's line-wide reboot after their Heroes Reborn experiment that saw their biggest properties optioned out to the creative studios of Jim Lee and Rob Liefeld in an effort to breath new life into them and increase sales. In Thor's case, the title was re-named Journey into Mystery for the duration of Heroes Reborn and then re-launched with the first number one in the character's history for Heroes Return under the guidance of Dan Jurgens and John Romita, Jr. (Thor originally appeared in Journey into Mystery #83 in 1962, a title that later changed names to Thor while keeping the original numbering at issue #126 in 1966).


Jurgens and Romita, Jr. waste no time in delving into a big, bombastic story, seemingly killing off Thor at the hands of the Destroyer by the end of the first issue.  The second issue sees Thor strike a deal with a character named Marnot while in Hela's Realm of Shadows, a deal which binds him to the mortal form of Jake Olson, an EMT who had also perished in the Destroyer's attack.  This sets up a modern variation of the classic Thor/Donald Blake duality that carries on throughout this collection.  While the majority of the action takes place on Thor's side of things (taking on threats like the Dark Gods, Thanos, Mangog, Malekith, and Kurse), Jurgens doesn't neglect the Jake Olson angle, frequently touching base with the Midgardian half of Thor's adventures by way of Jake's fiancée Hannah (and her daughter Amanda), Jake's EMT partner Demitrius, and even Doctor Jane Foster.


The story that Jurgens tells in this first half of his run is quite entertaining.  Enough so that as I finished this brick of a book, I felt the need to immediately jump into Volume 2 (which is equally as thick).  Romita, Jr.'s work on Thor is some of his best in my opinion.  This is Romita, Jr. still in his prime, before his style developed a more rushed look.  He was the primary penciler for the majority of the first twenty five issues before passing the title on to the likes of Erik Larsen, Andy Kubert, and Stuart Immonen (Lee Weeks and others fill in for an issue here and there throughout).


Comics from the 1990's tend to have a certain stigma of ridiculous excess attached to them, but if you ask me, this run is one of the highlights from the later part of the decade along with the Marvel Knights Daredevil relaunch by Kevin Smith and Joe Quesada and Christopher Priest's Black Panther.


Aside from Jurgens' overuse of Thor's phrase "I say thee, nay!", there isn't much to complain about here.  There's even a nice, compelling twist revolving around Thor's mortal guise of Jack Olson which keeps things interesting.  One minor complaint that I have is the way in which a couple cross over issues with other titles interrupt what Jurgens has going on in the Thor title.  They were clearly mandated by editorial and break up the run's momentum on a couple of different occasions.


As a huge collected edition, this omnibus includes a number of extras: house ads for the title, Jurgens' original script along with Romita Jr.'s original pencils for the first issue, a couple creator interviews, original sketches for a few covers, and a couple Thor-centric covers from Wizard Magazine that appeared during the run.


My Thor exposure is still relatively minimal in the grand scheme of things (I've read Simonson's run, then everything from J. Michael Straczynski through Jason Aaron's current run), but I feel like this material is definitely worthy of the God of Thunder.  I'm glad that I listened to my friend's recommendation sight unseen and am happy to have added it to my expanding Thor collection.  Now to keep the momentum going on through Volume 2!