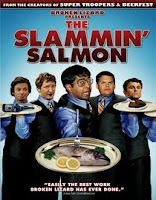 The Slammin' Salmon (2009), R, 90 minutes - The Slammin' Salmon is brought to us by Broken Lizard - the same group that provided us with Super Troopers and Beerfest. While not being as movie quote friendly as either of those two, it is a pretty entertaining restaurant based comedy.

The Slammin' Salmon an upscale seafood restaurant owned by Cleon 'Slammin' Salmon (Michael Clarke Duncan) the heavyweight champion boxer. He ran up a $20,000 gambling debt to the leader of the Yakuza on a recent trip to Japan and has to come up with the money by the next morning. He instructs his restaurant manager that the waitstaff must have a record night so that he can come up with the cash to pay off the Yakuza (the restaurant record is in the neighborhood of $15,000). After the waitstaff gets off to a slow start, he sweetens the deal by offering a $10,000 bonus to the waiter/waitress who brings in the most money. 'Isn't that counterproductive?' you ask? Well, yeah, it is. But this is a Broken Lizard comedy so that just compounds the shenanigans that ensue.

What we get is a comedy that's a combination of Super Troopers and Waiting with a little bit of Brick Tamland from Anchorman thrown in (thanks to Nuts played by Jay Chandrasekhar). There's even a pretty good (as in both disgusting and funny) gross out scene worthy of any restaurant based comedy.

If you have enjoyed, on any level, any previous Broken Lizard productions then you'll probably get a few laughs out of The Slammin' Salmon. Otherwise you'll probably want to steer clear.