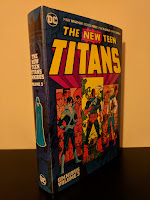 My last review was for volume two of this series of omnibi and I enjoyed it so much that instead of taking a break for something else, I dove right into volume three (just released last month), and boy am I glad I did.

This volume covers two of the best story arcs from the creative team of Marv Wolfman and George Pérez that I have read, beginning with the classically acclaimed The Judas Contract and then later The Terror of Trigon (Pérez's last contribution to the title before a few year hiatus).  I had minimal passing knowledge of the events of both arcs thanks to their loose adaptations in the Teen Titans animated series that ran from 2003-2006, but these original versions prove to be masterfully crafted.


The Judas Contract starts this collection off with a bang as the Titans are betrayed by one of their own, Dick Grayson re-brands himself as Nightwing, and we're introduced to a new character named Jericho, all while their clash with Deathstroke (which has been developing since issue #2, collected in volume one) comes to a head.   Following that arc, we get a number of shorter stories ranging from the Titans enlisting the help of Aqualad and Tula, to Donna Troy's wedding, to Cyborg reconnecting with his grandparents, to Deathstroke's trial, and Gar (Changeling) experiencing some serious character growth thanks to a heart to heart conversation the most unlikely of sources.  A re-constituted Fearsome Five makes another attempt to take down the Titans as Cyborg continues to struggle with his outward appearance to others.  There's even a tease for the upcoming (at the time) Crisis on Infinite Earths, which we now know had a gigantic impact on the DC universe.  Marv Wolfman writes all of these issues and George Pérez illustrates up to issue fifty, before taking a short break with likes of Rich Buckler, Carmine Infantino, Ron Randall, and Chuck Patton filling in in his absence.  Inking contributions on the issues collected in this volume were made by Romeo Tanghal, Dick Giordano, Mike DeCarlo, and Bob Smith.


At this point the title reverts to its original name The New Teen Titans, but this time the name changes is accompanied by a numbering re-launch as well. This is where Wolfman delves into Raven's long, slow descent towards darkness in The Terror of Trigon arc.  After his short break, George Pérez returns to the title for one last hurrah  before departing for a few years.  The focus of the story is on Raven and her lineage, but Wolfman does a great job giving each and every Titan an introspective moment that really explores their individual issues.  It's an exemplary example of organically working character development into the story being told.  After the Trigon tale, José Luis García-López takes over for Pérez on art duties.


I've said this before regarding both of the earlier volumes of this series, but reading this material thirty years after it was first published, I continue to be amazed at some of the subject mater tackled in these stories.  Not only were they way ahead of their time, but they hold up quite well in my opinion.  Sure, there are some references here and there that seem dated, but all in all, the heart of these tales continue to be relevant.


This collection includes introductions from both Wolfman (reprinted from 2003) and Pérez (reprinted from 1988) at the beginning, and also includes a few pages of cover art at the end (where volume two didn't have any extras).  The cover under the dust jacket matches the previous two volumes, with flat matte black, debossed, cover boards.  It may be plain, but I continue to feel like it is a nice, clean look, and I'm happy that DC has stayed consistent across the volumes released thus far.


This volume continues the series of new omnibus editions for The New Teen Titans title as a whole as opposed to the previous editions that collected just the Wolfman/Pérez material.  As such, the contents of this edition are drastically different from the previous volume three (that volume skipped the non-Pérez material and jumped forward to included the "Who is Donna Troy?" arc and subsequent issues that Pérez co-wrote with Wolfman).  With a little luck, this series of New Teen Titans omnibi will continue to be popular enough to extend long enough to collect that material in a future volume of this series.


Having burned through both volumes two and three so quickly, I now find myself having to wait a few months until I can continue to read about the adventures, trials, and tribulations of The New Teen Titans (volume four is currently scheduled to be released next May).  Unfortunately, there will not be any more Pérez artwork moving forward (at least not until they begin collecting the 1988 material beginning when he returned).  That's disappointing as I have come to love his work, but I'm still excited to see where Wolfman takes these characters next.  His scripts may be a bit wordy compared to more modern material, but I love his ability to provide a unique voice and depth of character to each and every team member.  I'm particularly looking forward to reading more about Jericho, who was completely new to me.  I really enjoy the challenges his abilities present in depicting him as he is such a visual character.  If you're a fan of this run this is an absolute pick-up.  If you're new to the material like I was, do yourself the favor of starting at the beginning.  These volumes collect some great early-mid '80s material.