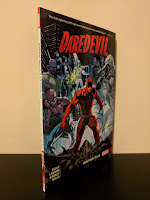 I'm a big proponent of talking up material that you enjoy and not wasting energy on bad mouthing the stuff you don't.  With that in mind, here are a few quick thoughts I have on this book, the most recent collected volume of Charles Soule's criminally under rated ongoing run on Daredevil.  Those who follow this blog know that I have been pushing this run for months, so please bear with me and don't tune me out!

Charles Soule continues to advance his run with this arc, and beyond the spoiler given away by this volume's title, he throws in a couple additional twists on top of that new, slightly outrageous status quo that makes this arc a quick, intriguing read, and that also propel the story beyond this collection (an arc illustrated by Nailbiter's Mike Henderson that recently ended and should be collected in Volume 7 early in 2019).


As the potential threat to the city that is Wilson Fisk's mayorship looms, Soule makes reference to and pulls heroic reinforcements from two of last year's Daredevil-adjacent titles (Kingpin by Matthew Rosenberg/Ben Torres and The Defenders by Brian Michael Bendis/David Marquez).  He also shows Fisk at his manipulative best, seemingly extending an olive branch to the other crime lords of New York City only to use them use them as part of a grander scheme.  If you should be looking for more of the ongoing personal battle between two of Soule's creations/additions to the Daredevil mythos, you'll be happy to see further Blindspot/Muse interaction.


The Mayor Fisk arc is penciled by Stefano Landini (#595-597) before Ron Garney returns to the title for the final three issues of his collaboration with Soule (#598-600).  There have been a number of artists involved in Soule's lengthy run, mostly alternating with Garney in an effort to keep the title on schedule (it has already cranked out forty issues since February, 2016 when Soule and Garney launched the run).  Garney set the visual tone for the book immediately and has consistently been the high water mark artistically during his time on the title.  Landini's style gels fairly well with Garney's, allowing for a smooth transition mid-way through the arc that isn't jarring.  His rendition of Matt Murdock is definitely inspired by Charlie Cox from the Netflix series.  That's not bad per se, but Matt's not been drawn like that in the past so it does stand out a bit.  Matt Milla's colors continue to provide a uniformity across artists, as they have throughout Soule's run.  Covers for the issues collected in this volume are provided by the great Bill Sienkiewicz, followed by Dan Mora.


The numbering for the issues included in this collection can be a little confusing thanks to Marvel's wonky Legacy numbering initiative that was implemented last fall.  As this set of trade paperbacks is currently the only way Soule's run has been collected, it is best to just follow the volume numbering.  Despite the crazy issue number jump due to the Legacy renumbering, this volume six does in fact follow immediately after the contents of volume five.


There aren't much in the way of extras in this volume.  Just are a few pages of reprinted variant covers along with an eight page back-up story titled "They Also Serve" by Christos Gage, Mike Perkins, and Andy Troy that appeared in issue #600. It's a nice little nod to Foggy Nelson and how he has always been there for Matt over the years.


I continue to be impressed with the run that Charles Soule has put together.  Despite my having picked up the trades, I look forward to a nice set of omnibi from Marvel once his run concludes.  I'm making assumptions here, but they are based on the fact that Marvel has a track record of omnibizing modern Daredevil runs, and that Soule has already eclipsed the number of issues written by Ed Brubaker (whose run was collected across two omnibi).  I totally understand if folks are waiting for a nicer, more substantial collection of this material before taking the plunge (I do the same for a number of titles), but I assure you that it will be worth it when the time comes (I'll just go ahead and start putting out the positive vibes now).