Collected Comic Review - Aquaman and The Others TPB Vol. 1-2 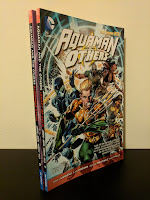 Believe it or not, for about a year during DC's New 52 era, there was a second monthly Aquaman title called Aquaman and The Others.  I don't claim to be an Aquaman historian, but I'm pretty sure that at no other point has DC released multiple, monthly Aquaman titles.  I remember trying to keep up with the title digitally when it first came out, only making it through a handful of issues before falling behind, eventually forgetting about it completely.  It wasn't until I read through the Aquaman by Geoff Johns Omnibus a week ago that I remembered this titled had existed.  With my interest piqued once again, I tracked down the two trade paperback volumes (the only format in which this series was collected) so that I could finally read it in its entirety.  Back when it was being published, this book was clearly trading on the strength of Johns' Aquaman run, as Arthur Curry himself plays a relatively minimal role in this year long book.


The Others (comprised of Kahina, The Operative, Prisoner of War, Vostok, and Ya'Wara) are a team of heroes that Aquaman worked with about five years prior to the creation of the Justice League in New 52 continuity and were first introduced during the second arc of Johns' Aquaman run.  Each possesses an Atlantean relic originally created by the Dead King of Atlantis that either provides or enhances abilities (for example, the orb Ya'Wara wields allows her to teleport anywhere she wants, while Kahina's relic allows her to focus the futuristic visions she already experiences).


After beginning with relatively stand alone tales from Aquaman (2011) #20 and Annual 1 (both collected here as opposed to the Aquaman by Geoff Johns Omnibus), the first trade paperback focuses on the relics themselves, and sees The Others combat Legend, the ancestor of the alchemist that originally possessed the Gold of Legacy that the relics are made of (stolen by the Dead King to create the relics).  Legend claims to be the rightful owner of the gold and plans to melt the relics down and re-purpose the gold for his own means.


The second volume sees The Others deal with internal strife while combating a villainous group led by Cheshire and KGBeast whose goal is to acquire launch codes for an old Soviet satellite weaponized with nuclear missiles.  This volume also includes the Futures End issues for both titles (Aquaman and Aquaman and the Others), that together tell a tale taking place five years in the future of New 52 continuity, after hordes from Apokolips have decimated the world.


John Ostrander wrote the Aquaman issues (#20 and the Annual), and the creative team of Dan Jurgens and Lan Medina produced the entirety of the Aquaman and The Others run (with Jurgens also writing the two Futures End issues). Manuel Garcia, Geraldo Borges, Netho Diaz, Alvaro Martinez, and Sean Chen pencil the Aquaman and Futures End issues providing pretty good visual continuity with Medina's work throughout both volumes.  Cover art was provided by Ivan Reis, Joe Prado, and Paul Pelletier, which was a nice tie to the main Aquaman series which was being illustrated by those three at the time.


There are no extras or bonus features in Volume 1, but Volume 2 includes a few pages of layouts, vehicle and character design sketches, and a couple of unused variant cover sketches which is a nice little touch for such a small trade paperback collection.


I wouldn't describe either of these arcs as 'must read' and they really shouldn't be read on their own since they spin directly out of another title.  I wouldn't even call them a companion piece, they are more of a tangential story.  The target readership for Aquaman and The Others is definitely a niche group: those who have read Geoff Johns' Aquaman run and who were intrigued by the introduction of these characters.  If you fall into that category, you may be interested in following their adventures in these two collections.  Personally, I enjoyed seeing the characters fleshed out a bit more, although the nature of the group lent itself to a fairly limited run, which was probably best ended when it did to avoid growing stale.