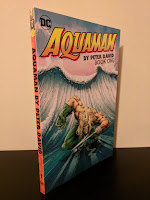 I've clearly been on an Aquaman kick lately, having really enjoyed both the Aquaman by Geoff Johns Omnibus and the Jason Momoa/Amber Heard-led live-action film.  I figured, what better time than now to check out another of DC's classic runs: Peter David's Aquaman.  Fortunately, this run is currently being collected by DC in thick trade paperbacks.  Unfortunately for newcomers to this material such as myself, only the two books have been released thus far (with a third solicited for the fall of 2019).  Judging by the length of David's run, a fourth volume should complete this series collecting his work on the title.  I may have gotten sucked into this era of Aquaman, but it doesn't look like I'll be able to finish David's Aquaman for another year or two.  In hindsight, I may not have picked the best time to dive into this run after all!


I've been reading Aquaman regularly since the beginning of DC's New 52 (2011), but my pre-New 52 Aqua-knowledge is extremely limited.  I knew that the character went through a phase in the '80s and '90s where Arthur Curry and his history received a number of reboots in an effort to make the title more appealing to the masses.  David's run is definitely the result of that process.  I also knew that this run was when Aquaman lost a hand and replaced it with a harpoon (aw yeah extreme '90s).


What I didn't realize prior to beginning this run, is that giving Arthur a visual, physical makeover wasn't the only thing that David changed.  He also completely ret-conned Arthur's lineage and upbringing, implementing a very Jungle Book-ish vibe to his childhood.  It took me a few issues to wrap my head around these changes, but by the time I had finished the four issue Time and Tide mini-series that begins Book One, I was able to really enjoy what came after.  Those four issues don't tie into each other as closely as one might expect from a mini-series, but they provide basic details of Arthur's personal history, which are actually quite important in fleshing out David's take on the character.


Over the nine issues that follow Time and Tide, Garth (Aqualad) finds Arthur moping around his 'Aquacave' and in his efforts to snap Arthur out of his funk, convinces him to help investigate a missing nuclear submarine, leading to their crossing paths with an international terrorist known as Charybdis.  Charybdis' master plan is to drain Aquaman and Dolphin (whom Charybdis already has in custody) of their powers and absorb them himself so that he can then gain access to a number of sunken and abandoned nuclear submarines and use their deserted payloads to launch a global attack.  The trio of Aquaman, Aqualad, and Dolphin thwart Charybdis' plans, but not before Arthur losses his left hand.  An event which isn't just the catalyst for the character's aesthetic change, but also the shift in the story's focus towards discovering more about Arthur's past.


The artwork for the Time and Tide mini was provided by Kirk Jarvinen, with Martin Egeland and Jim Calafiore on issues of the main series.  I personally enjoyed the look of the main series a bit more as it has a little more of an edge to it.  Something which is also reflected in the tone of the stories at that point.


Most trade paperback collections don't include much in the way of extra features, but this volume does include an introduction from Peter David himself, and also reprints the cover to a previous released Aquaman: Time and Time collection.


Sure there's a fair share of '90s cheese/extreme-ness here, but for the most part, it is an enjoyable read.  Especially for someone like myself who is new to the material as it's an entirely different take on the character.  David didn't just make a small change here or there, he re-worked the entire Aquaman mythos from the ground up.  That thought prompts me to mention another Peter David collection: the seven issue mini-series titled The Atlantis Chronicles (1990).  From what I have been told, Atlantis Chronicles is a retelling of Atlantean history in the DC Universe, and while I've also been told that David's Aquaman run can be read on its own, after reading Book One I wonder if having read Atlantis Chronicles would provide some added context for the story to come.  After all, the Time and Tide mini-series opens with Arthur reading from the pages of The Atlantis Chronicles.


The most important thing I consider when beginning a long run is whether or not the first volume drew me in enough to continue.  In this particular case, that was a definitive yes.  It may have taken me a few issues to really get into, but that was more of a me thing than an issue with the material as I wasn't anticipating such a dramatic difference from what I knew of the character.  I'm glad that I have Book Two on the way (along with Atlantis Chronicles in hopes of added context), but at the same time I'm a little bummed knowing that I'll have to wait for the third installment.  Hopefully DC sees fit to complete this series of collections as Aquaman by Peter David Book One has me on the hook so to speak.