Some followers of this blog may remember my review for Frank Gogol's first published work last summer, the well received anthology collection GRIEF. Over the past year, he's been building on the success of GRIEF, crushing the con circuit, and developing new idea after new idea.  As a result, beginning in July, Source Point Press will be releasing his first mini-series: Dead End Kids  (the official announcement of which was made in March at the Chicago Comic & Entertainment Expo - C2E2).

I don't generally review single issues - it's much tougher to discuss a single chapter of a story without spoiling it - but when Frank reached out and asked if I'd like to read an advance copy of Dead End Kids #1 and I thought it would be fun to do something a little different (full disclosure: I 'met' Frank Gogol through a comics-centric Facebook group a little over a year ago).

Dead End Kids is a three issue mini-series set in the late 1990's, focusing on a tight-knit group of friends who are shocked to learn about, and then deal with the mysterious death of one of their own. Those who have read GRIEF have an idea of Frank's ability to pack a ton of emotion into a short amount of space, a talent that he utilizes well throughout the first issue as he is able to introduce the reader to his four main characters in just a single page each. One might worry that that isn't enough to get the job done effectively, but between his scripts and Nenad Cviticanin's art (a prior collaborator on GRIEF), we get a great feel for each character and the family/home environments they come from. Knocking the introductions out in a tight, illustrative way like that allows more room for the story's set up, of which there is plenty in this murder mystery/thriller.


Having been a teenager myself in the '90s, Dead End Kids successfully takes me back to that time. From the lyrics of The Offspring on the title page, to band and movie posters on the walls, to the character designs (two of which channel their inner Clint Eastwood and Fred Durst), the book has an authentic feel to it. Cviticanin's coloring helps with this almost as much as the general character/set design as it is muted and definitely conveys a grungy feeling to the story being told.

It is great to see the next evolution of Frank's work as he transitions to full issues/series from short stories. The emotion is still there. As is the ability to script a scene without necessarily saying much at all. He really nails the story's tease at the end of the first issue, leaving the reader eagerly awaiting the next issue.

I was fortunate enough to have been given the opportunity to check out all three issues and I can safely say that the second and third issues pay off on the potential set forth in this first issue.  If you liked GRIEF, grew up in the '90s, or even just enjoy a good who-done-it, then Dead End Kids is a series that'll surely entertain.


Dead End Kids #1 hits store shelves on July 24!  After you pick it up (and love it!), give your LCS the Diamond Previews Order Codes below to make sure that you get issue #'s 2 and 3!

EDIT: there was a delay at the distributor level and DEK #1 is now due to hit stores on 8/7!


Also be sure to sign up for Frank's newsletter 'Caption Boxes' by visiting his website.  He discusses projects he's working on, his experiences within the comic industry, process thoughts, and his con schedule (which is pretty busy, so check to see if he'll be in your area)*.  It really is one of the best comic creator newsletters that I've seen.

*Frank will be at Comic-Con International: San Diego next weekend (July 18-21) with Source Point Press at booth #2306 where he'll have a variety of Dead End Kids convention exclusive items!  If you're attending SDCC this year, be sure to stop by and chat with the man himself!


**Anomaly Comics has partnered with Source Point Press for a wicked cool, Anomaly Comics Exclusive Variant for Dead End Kids #1 by Ben Templesmith!  Hit up their website to get your hands on this very limited variant (just 100 copies): 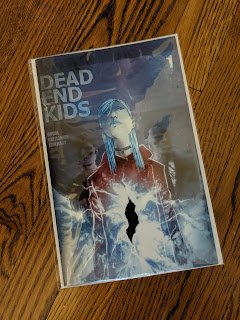