November 13, 2012
Well here it is: my 100th post on the blog formerly known as "Somebody Check My Brain" and "Brooks Hatlen's Library".  It's sort of hard to believe that I have stuck to blogging actually, albeit with some delays here and there.  As the description in the header for "Nerd in the 'Noke" states, this is primarily a place where I share my thoughts on movies, but from time to time I have been known to post about other interests such as music or comics.  To celebrate my 100th post, I thought that it might be fun to revisit something a little different from the earliest days of the blog: a music review.  But before I get into my review, I would like to thank all of you that have taken the time to check in and read my thoughts.  Because of Blogger's stat tracking, I have been completely surprised at just how much this blog has been viewed.  It started as a place to collect and share my thoughts about things that interest me.  I can honestly say that I never really thought that anyone would give a rats @$$.  I really do appreciate it! 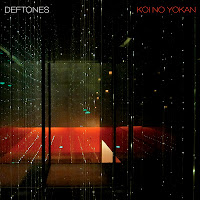 Ok, so the review for "Diamond Eyes" went up with that album's release two and a half years ago, and it is an album that still gets regular play on my iPod.  In that time the Deftones have grown, for me personally, from a band that I thought I was having a phase with, to legitimately becoming one of my favorites.  Today saw the release of "Koi No Yokan", which is their seventh full length studio release, and after the first few listens, I think it may be even stronger than "Diamond Eyes" was.

"Koi No Yokan" has the same diversity but the album plays in a more balanced way.  The track list is spans a wide array of the band's sounds.  "Romantic Dreams", "Entombed", "Rosemary", and "What Happened To You?" come in at a slower pace with lead singer Chino Moreno's vocals really being given the chance to shine, while tracks like "Swerve City", "Leathers", "Poltergeist" and "Goon Squad" feature the hard driving guitars and loud vocals that we've come to expect from the Deftones.  Moreno's ability to shift from singing to just plain being loud and back is amazing and is a very big reason behind the Deftones unique sound.  At this point I think my personal favorites from this album are "Romantic Dreams", "Tempest", and "Goon Squad".

The first two singles from the album have been embedded below ("Leathers" and "Tempest").  Give them a listen to get a feel for "Koi No Yokan"'s tone.  In my opinion this new album combines the strengths of "White Pony" and "Diamond Eyes" (arguably their two best albums) along with just a little bit of focus and polish.  It is obvious that the Deftones continue to grow as a band with this effort.  I for one will be eagerly checking their upcoming tour schedule in hopes that they hit a stage within travel distance.


- Just a fun little bit of info: from what I have read on the web, "Koi No Yokan" is a Japanese phrase with no direct American translation, but means something along the lines of 'the moment when you realize you are going to fall in love with someone'.