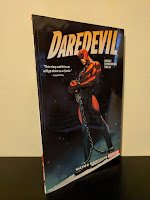 Since Marvel has not yet seen fit to give Charles Soule's excellent, recently completed Daredevil run the oversize hardcover/omnibus treatment yet, I feel compelled to continue my series of reviews for the trade paperback collections (the previous entries can be found here, here and here).  Volume 7 just came out a couple weeks back and includes one of my favorite arcs from Soule's run: Mayor Murdock.

I won't get into too many story specifics as the title of this volume itself is a bit of a spoiler for events from the end of Volume 6.  With Mayor Fisk incapacitated and The Hand descending upon New York, a little known order of succession change made by Fisk's predecessor puts the Mayor-ship of New York in the hands of Matt Murdock!  Can the Man Without Fear save his beloved city from one (or is that two?) of his fiercest enemies?  And can he do so without revealing his recently regained secret identity to the world?


I know that I've been raving about Soule's work on Daredevil for quite some time, but honestly he really has implemented a number of compelling and intriguing elements throughout his run.  From Matt's relationships (both personal and with other heroes), to the use of his super senses, and of course his legal prowess, which receives much more focus during this run than it has in a number of years.  Soule also hasn't been afraid to add new characters and organizations to the Daredevil mythos, a couple of which are more fully fleshed out during this arc, meshing a little bit of swords and sorcery action with mystical ninjas.  It sounds crazy right?  But it works!  And it's a lot of fun.


Art duties for this arc shift to Mike Henderson (Nailbiter, Deadpool vs. Old Man Logan, the current Dead Man Logan) and he continues the high standard set by Ron Garney before him.  Over the last year or so, he's become one of my favorite artists.  His action scenes are dynamic and he conveys facial expressions and emotion extremely well.  The way he presents his sequences and panels is very cinematic.  Henderson has said that his time on Daredevil was always planned to be a single arc, but it is still a bit disappointing that it didn't last longer (taking nothing away from Phil Noto, who illustrated the final issues of Soule's run and also did a spectacular job).  Specifically, I would love to see more of his rendition of Elektra, which reminds me of her classic look from Elektra Lives Again by Frank Miller.


The coloring, as has been the case with Soule's entire run to this point, was supplied by Matt Milla, who continues to provide visual continuity across the handful of artists that have populated this forty-some-odd issue run.  I also feel like I should mention letterer Clayton Cowles' efforts.  Like Milla, he has worked on this entire run, and at no point has there been any confusion on what should be read next.  It's funny how you don't really think about lettering unless it hinders the reading experience, which Cowles' work never does.  Covers for this run were done by Chris Sprouse, and variant covers to two issues (by Dan Mora/Romulo Fajardo, Jr. and Mike Perkins/Andy Troy respectively) are the only extras contained in this collection.


This volume really does continue the momentum that Soule has built throughout his run, and charges through to the events that follow.  There is one plot point that falls a bit flat, but that's through no fault of Soule's.  An earlier story thread involving Elektra comes to fruition in this collection, and is no where near as interesting as likely originally intended because of events in Brian Micheal Bendis' Jessica Jones (2016) series (which I will not spoil here).


Charles Soule's work on Daredevil has been excellent from the get-go and this volume is no different.  You certainly don't want to jump right in at this stage of the run, but I highly recommend that you seek it out either via these trade paperbacks (or digitally).  I completely understand if you're waiting for larger, nicer collections (I will certainly upgrade when the time comes), but this run deserves to be read in any format.